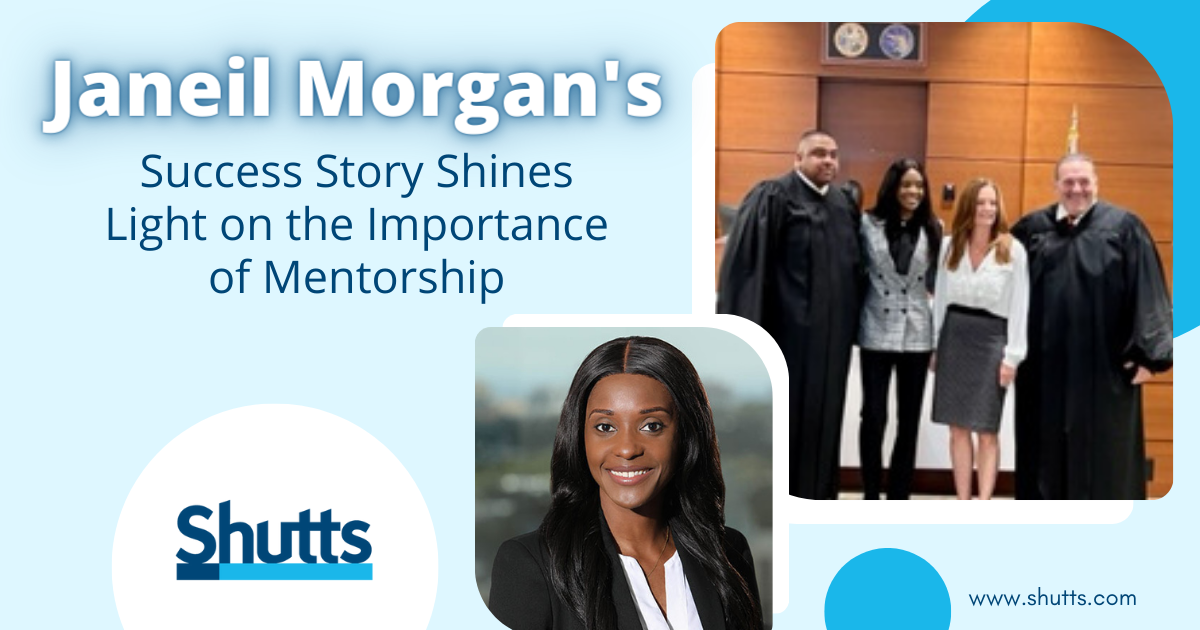 On Monday, October 10, Janeil A. Morgan took the oath for admission to The Florida Bar, becoming the latest to join the attorney ranks at Shutts & Bowen LLP.

“Janeil was 15 when I met her, and I knew from day one that she had what it took to succeed,” Suzanne said. “She was a natural litigator.”

Janeil, the daughter of Jamaican immigrants who moved to South Florida when she was 7, was enrolled in her high school’s pre-law magnet program where Suzanne was a volunteer attorney. With Suzanne’s help, Janeil earned numerous awards as a member of the trial team in high school. She even had the opportunity to argue before the Fourth District Court of Appeal during a moot court competition.

Suzanne’s support never wavered as Janeil went off to college. She guided Janeil’s academic journey through undergraduate school at the University of Central Florida before getting accepted to the University of Florida’s Levin College of Law. Janeil would go on to serve as president of the Florida Trial Team while in law school.

Janeil was also able to learn about what went on day-to-day at a law firm when she was offered a job as an office clerk at Shutts the year before she entered law school. As a 1L, she was given the opportunity to work as a law clerk. When she was offered an associate position with the firm, Janeil said accepting the offer was a “no-brainer.”

“When a firm like Shutts reaches out to you and shows so much support at such a young age, it really makes you feel like family – it’s next-level mentorship,” she said. “You feel, to such a greater degree, that the organization is invested in your future and truly wants to see you succeed.”

About Janeil A. Morgan

Suzanne M. Driscoll is a partner in the Government Law Practice Group at Shutts & Bowen LLP. She received her B.A. in Sociology in 1986 and her Juris Doctorate in 1989, both from the University of Miami. Suzanne is a Martindale-Hubbell AV Preeminent Rated 5.0 litigator whose experience includes more than 50 jury trials. Suzanne has a long history of mentoring students and young lawyers. For more than 5 years, she served as the Mock Trial and Moot Court “coach” for Fort Lauderdale High School’s Law Magnet Program. More than 10 of her former students are either in law school or have graduated and become attorneys.