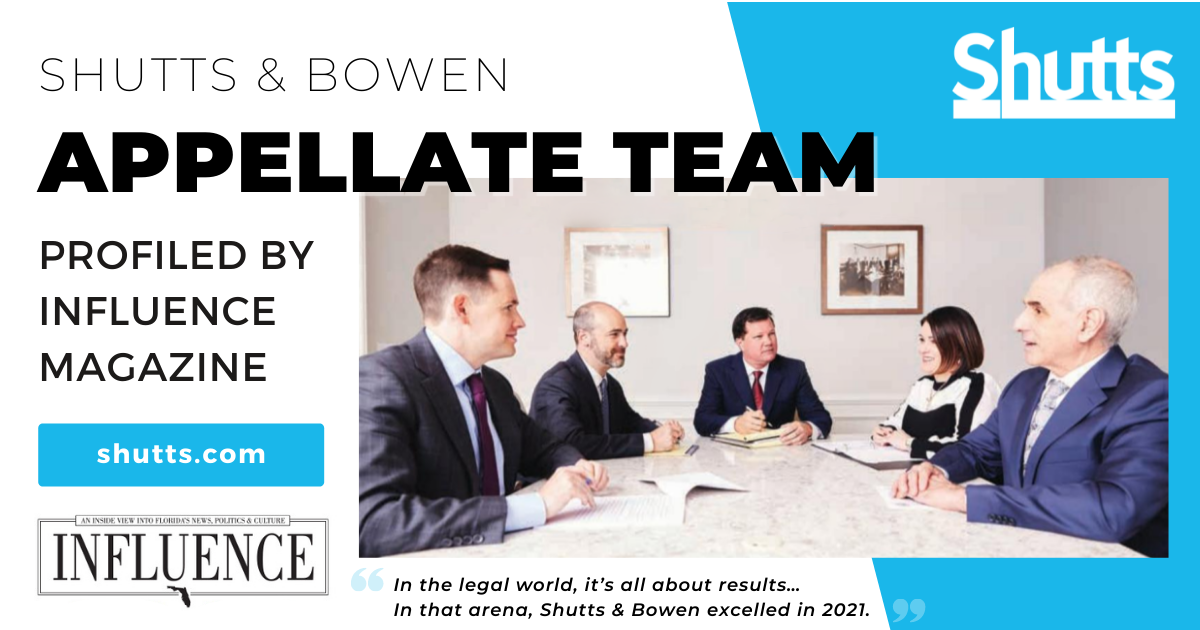 In the Fall 2021 edition of INFLUENCE Magazine, Shutts & Bowen LLP’s Appellate Team was profiled among the honorees of the publication’s 2021 Golden Rotunda Awards, for their contributions to the reform of Florida’s civil justice system.

The spotlight piece focuses on the victories achieved by the Shutts Appellate Team on behalf of their clients over the past year, with an emphasis on their involvement in significant legislative reforms, including the state’s adoption of the summary judgment standard and the apex doctrine. Among the Shutts attorneys recognized for their progress in reforming the Florida court system were Appellate Practice Group Chairman and Tallahassee Managing Partner, Jason Gonzalez, as well as Amber Stoner Nunnally, George Meros, Julissa Rodriguez, Daniel Nordby and Benjamin Gibson.

The publication further praised the successes of the team, calling it a banner year for the firm and emphasizing that “in the legal world, it’s all about results…In that arena, Shutts & Bowen excelled in 2021.”

According to the piece, Florida’s broken legal environment has been difficult for businesses to navigate, “but with the string of lawsuit reforms passed by the Legislature…there’s an air of optimism in the state. You can thank the lawyers at Shutts & Bowen for that.”

INFLUENCE Magazine is a magazine on Florida politics from Peter Schorsch and Extensive Enterprises Media. The magazine's target readers are the politicians, the lobbyists, the law firms and the big business leaders who closely watch the political moves that keep the wheels of government moving.