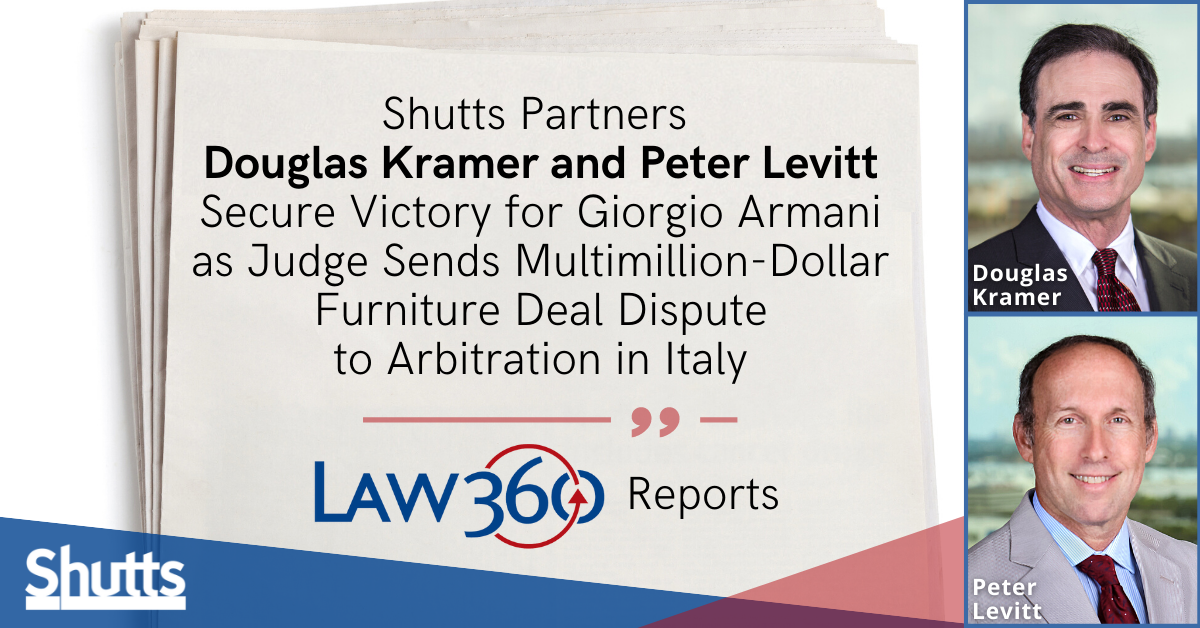 A federal court Judge in the Southern District of Florida recently ruled that a multimillion-dollar lawsuit filed against Giorgio Armani by its former exclusive home furnishing dealer must be arbitrated, siding with the Italian fashion designer in rejecting arguments that the dealer’s claim for enforcement of an oral agreement and other claims are not arbitrable.

As reported by Law360, Mediterranea Trading in 2011 entered into a five-year written agreement to be the exclusive furniture dealer for Armani's home furnishings in South Florida.

U.S. District Judge Joan A. Lenard rejected each of Mediterranea Trading’s arguments against arbitration and agreed with each of Armani’s arguments.  “Here, the court finds that all plaintiff’s claims are subject to arbitration,” the judge wrote. “As such, the court finds that dismissal without prejudice is appropriate.”  Judge Leonard’s detailed opinion provides clarification and guidance concerning a number of important legal issues relating to arbitration, particularly in the context of international commercial disputes.

Douglas M. Kramer is a partner in the Miami office of Shutts & Bowen LLP, where he is a member of the International Dispute Resolution Practice Group. A Martindale-Hubbell AV® rated civil litigation and trial attorney, Doug has more than 30 years of experience providing counsel and guidance to clients in a variety of disputes. He has extensive experience handling real estate, insurance and business matters, including resolving disputes involving agreements, leases, shareholder relationships, creditor's rights issues, and liens and foreclosures. He also litigates business tort claims, including those alleging fraud or misrepresentation, intentional interference with business contracts or relationships and conversion.

Peter H. Levitt is a partner in the Miami office of Shutts & Bowen LLP, where he is a member of the International Arbitration and Litigation Practice Group. Peter’s broad-based practice involves representing financial institutions, property owners and investors in a wide variety of complex bankruptcy and commercial disputes, many of which involve litigation in multiple jurisdictions. His primary expertise is in bankruptcy, insolvency and real estate law with an emphasis on litigation arising in these contexts. Peter has tried numerous cases in federal and state courts. He also has substantial appellate experience, having argued significant cases in multiple federal and state jurisdictions.