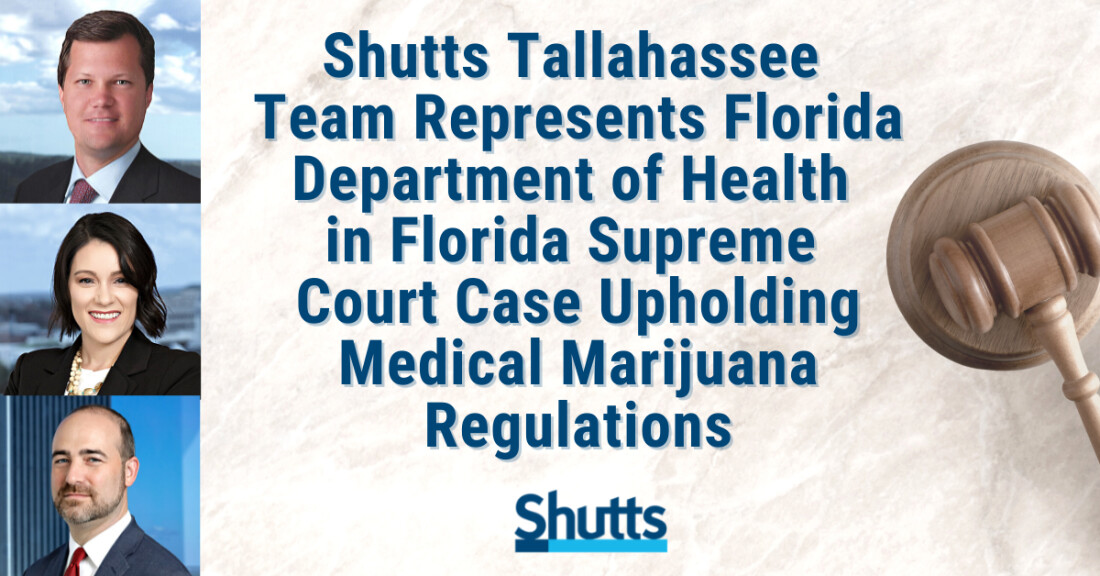 The Florida Supreme Court’s 6-1 ruling in favor of Shutts & Bowen’s client wraps up a three-year legal battle over the constitutionality of statutory restrictions on medical marijuana. The Court’s opinion, issued on May 27, 2021, reversed a lower court ruling and rejected Florigrown LLC’s constitutional challenges to state licensing rules among Florida’s medical marijuana regulations. The lawsuit filed by Florigrown, a company attempting to obtain a license to grow and sell marijuana, had alleged that constitutional conflicts existed between a 2016 Florida voter-approved medical marijuana amendment and a 2017 state law establishing a cap on treatment center licenses and a vertical integration requirement.

Consistent with the arguments presented by Shutts on behalf of its client, the Supreme Court considered the First District’s certified question of great public importance and rejected Florigrown’s “special law” claim, asserting that the company had overlooked the full context of the Florida amendment defining medical marijuana treatment centers and failed to show a substantial likelihood of success on the merits of its constitutional challenges. Included in the court’s issued opinion were points presented by Shutts on behalf of its client to a trial judge at the onset of the case, asserting the legislative power of the state and the presumed constitutional validity of Florida’s statutes.

“We once again successfully advocated for our client and received support from the Florida Supreme Court for our trial court arguments that set forth the basic fundamentals of our constitutional system,” said Jason Gonzalez, Managing Partner of the Shutts Tallahassee office and Chairman of the Appellate practice group. “Our client is grateful that the Court upheld the long-recognized and frequently reaffirmed plenary power of the Florida Legislature.”