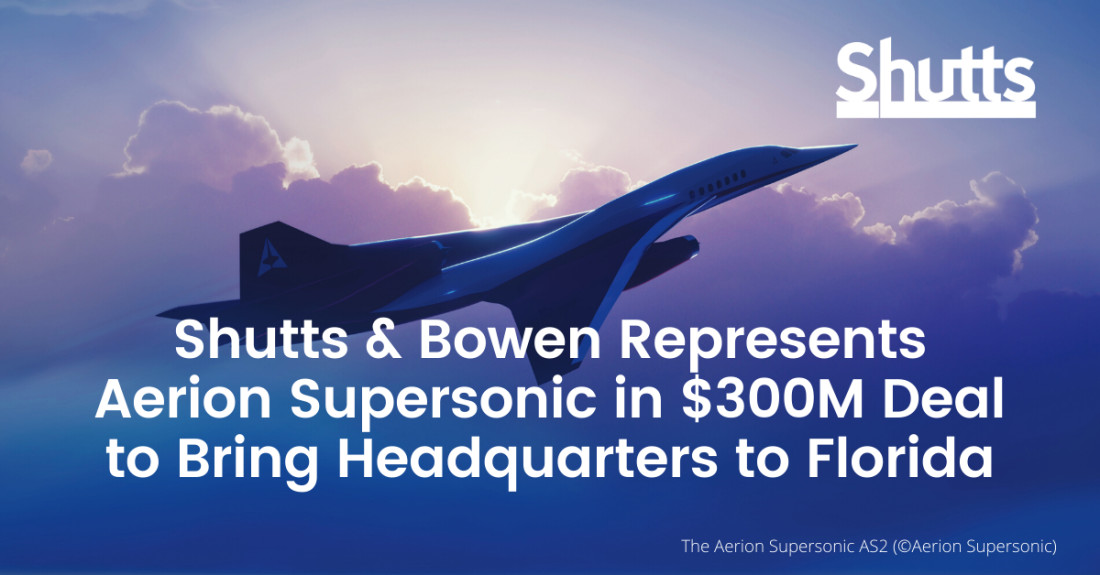 The Orlando office of Shutts & Bowen LLP is proud to announce its successful negotiation of a $300 million deal in representation of client Aerion Supersonic, bringing the supersonic aircraft manufacturer’s headquarters to the state of Florida.

As part of the deal, Aerion Supersonic will construct its high-tech headquarters, Aerion Park, in Melbourne, Florida. The new project will involve a multi-year, $300 million investment and is slated to bring 675 jobs to Florida by 2026. The project is due to break ground later this year. Aerion Supersonic’s current headquarters are in Reno, Nevada.

Shutts partners Daniel O’Keefe — Co-Managing Partner of the Orlando office — and Brett Renton, who were Aerion’s primary counsel for the deal, provided expeditious and strategic counsel on an array of matters, including the legalities of the deal structure and complex tax issues, as well as guiding the deal in coordination with Aerion’s in-house legal, finance and facilities teams, and the company’s site selection advisors, J.M. Mullis, Inc..

“Determining Aerion’s headquarters involved an extensive search and evaluation study, considering numerous possible locations across multiple states where Melbourne emerged as the clear choice,” said O’Keefe. “Time was of the essence in moving this fast-paced deal forward, which involved lengthy and complex processes at every stage.”

According to O’Keefe and Renton, timing and confidentiality were key factors in ensuring the deal closed within the designated timeframe. While fast-tracking such a large deal would normally be a feat in itself, social distancing also created unique challenges. Thanks to the spirit of cooperation among multiple government agencies and supporting officials all working remotely, the deal was able to conclude without interruption. In addition to O’Keefe and Renton, Shutts attorneys Russell Hintze, Cameron Katz, Joseph Goldstein and Neil Shoter were involved in the deal, providing guidance and counsel on deal structure, lease terms and complex tax issues that affected the project.

“To have such a well-respected company as Aerion Supersonic choose Florida for its headquarters is an achievement for the state,” added Renton. “Aerion is going to be a major player in Florida’s evolving aerospace industry, and we look forward to providing the company with ongoing legal support in Florida.”

Aerion, the industry leader in supersonic travel, is pioneering a new generation of high-speed mobility solutions that significantly reduce the time and friction of travel while leaving no carbon footprint behind.

Aerion, the industry leader in supersonic travel, is pioneering a new generation of high-speed mobility solutions that significantly reduce the time and friction of travel while leaving no carbon footprint behind. The Mach 1.4 AS2 business jet is the first step towards this new paradigm of global mobility – powered by the world’s first efficient supersonic engine and designed for carbon neutral operation.