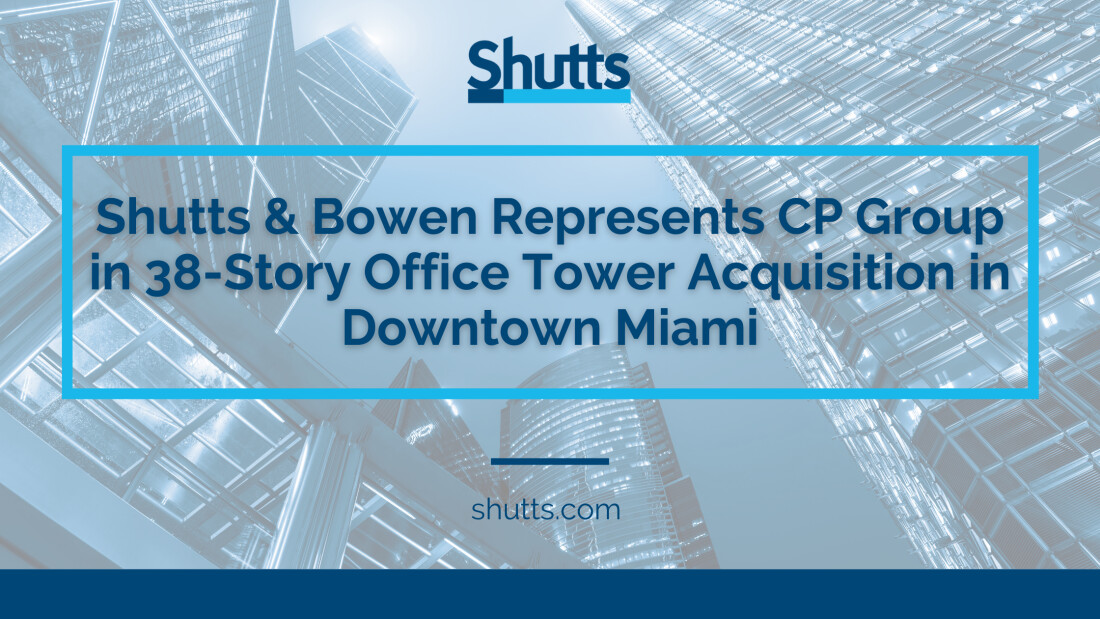 One Biscayne Tower was built on the 40,237-square-foot site in 1973 and totals 982,578 square feet in 38 stories, with 691,980 square feet of leasable space. CP Group has plans for renovating the site, including to the exterior façade, lobby, gym, lower basement levels and the café. It is also expected to add a conference center to the building.

"Our tenants are coming from all over the country with reset expectations," said Brett Reese, senior VP of CP Group. "It is incumbent upon us to evolve and adapt and deliver on what they are looking for."

CP Group, previously known as Crocker Partners, has ownership interest in over 2 million feet of office space in Downtown Miami, including the SunTrust International Center and Citigroup Center.

"In addition to expanding our broad spectrum of offerings in downtown Miami, this acquisition allows us to capitalize on the city’s unprecedented momentum, as new residents and workers continue to flock here from around the country,” said Angelo Bianco, managing partner at CP Group. "The building is among the city’s most prestigious office destinations, offering an array of first-class amenities that embody the one-of-a-kind culture and lifestyle.

Arthur J. Menor is the Managing Partner of the West Palm Beach office of Shutts & Bowen LLP. He is a member of the firm's Executive Committee and Chairman of the Real Estate Leasing Practice Group. A nationally recognized real estate lawyer, Art has over 40 years of experience in all facets of commercial real estate, focusing on commercial leasing and the acquisition and disposition of commercial real estate. He advises landlords and tenants in various aspects of the leasing process and also counsels developers, investors, and lenders. As a seasoned veteran, Art has worked on real estate projects of all sizes and has mastered his craft in improving the lease drafting and negotiation processes, including using technology to build and customize high-quality leasing documents in a cost-effective manner.

Active in the commercial real estate business for over 35 years, CP Group, formerly Crocker Partners, has established a reputation as a premier owner, operator, and developer of office and mixed-use projects throughout the Southeast and Southwest United States. Since 1986, CP Group has acquired and managed over 158 properties, totaling 50 million square feet and representing $6 billion invested. They are currently Florida's largest and Atlanta's [second]-largest office landlord and rank 34th largest in the United States. Headquartered in Boca Raton, Florida, they have regional offices in Atlanta, Miami, Jacksonville, Dallas, and Washington DC. To learn more about the company, visit CPGcre.com.